Please note that CHPA is monitoring COVID guidelines. Updates will be provided below and in member communications.
Register
About
Program
Registration
Speakers
Hotel & Travel
Sponsors

Important Notice for In Person Attendees Below

CHPA is monitoring local and federal COVID guidelines so that we can safely meet in person. Updates will be provided on this website and in CHPA member communications. Proof of vaccination will be required and CHPA requests that all vaccinations are up to date. 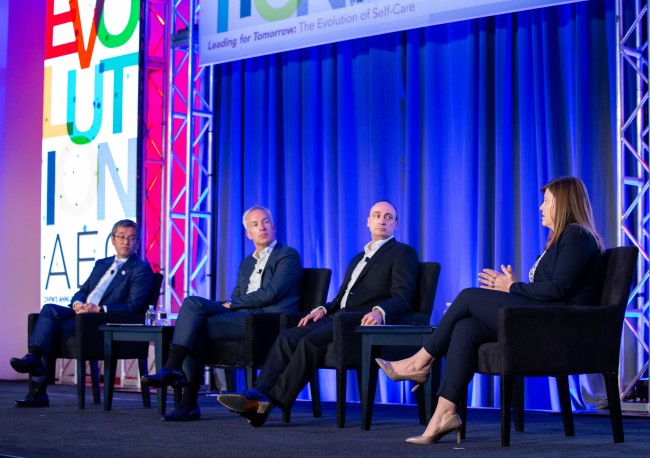 Make plans to join us at CHPA's 2022 Self-Care Leadership Summit (SLS), the industry's leading event, once again convening the nation's top consumer healthcare executives. Don’t miss the three days of unparalleled networking and high-impact sessions featuring global thought leaders. This is where the business of the self-care industry happens.

Registration and program information is now available on the respective tabs above.

"Under the guidance of CHPA, the Annual Meeting is where companies come together to navigate industry & category wide issues."

"If you are a key player in the consumer healthcare space, taking advantage of being in an environment where competitors come together as collaborators is imperative."

Program and Agenda (as of January 20)

How to Register for the Conference

Greg Behar is the CEO of Nestlé Health Science, a member of the Nestlé Executive Board and a passionate believer in the power of nutrition to support health.

Greg joined NHSc in 2014 and has guided the company to become a global leader in the science of nutrition. His dedication to ensuring that customers and patients can enjoy their highest quality of life fuels his continual drive to provide the most innovative and effective nutrition-based solutions.

With more than 20 years of international experience and roles in seven countries, Greg brings a truly global approach to NHSc’s vision. Prior to joining Nestlé Health Science, Greg was CEO of Boehringer Ingelheim Pharmaceuticals USA, as well as a regional leadership position. Greg also worked at Novartis in general management roles in Spain and the European region. He currently serves on the boards of Seres Therapeutics Inc. (USA), Axcella Health Inc. (USA), of Amazentis SA (CH) and of Sonova AG (CH).

Greg earned an MBA from INSEAD, a Masters in Engineering from the Institute of Technology of Switzerland (Ecole Polytechnique Fédérale de Lausanne or EPFL) and a BS in Mechanical Engineering from UCLA. A current Swiss national champion swimmer, Greg loves sports as a way of life, is married and has three wonderful children aged 17, 19 and 21.

Fred Hassan is a Director with the private equity firm, Warburg Pincus. He is also a Board member of Precigen, IntegraConnect, Theramex, Prometheus Biosciences, and BridgeBio. Fred Hassan is the former Chairman of the Board and Chief Executive Officer of Schering-Plough Corporation. Prior to joining Schering-Plough in April 2003, Hassan was Chairman and Chief Executive Officer of Pharmacia Corporation – a company that was formed in March 2000 because of the merger of Monsanto and Pharmacia and Upjohn. Hassan joined Pharmacia & Upjohn as Chief Executive Officer in 1997. Previously, Hassan was Executive Vice President of Wyeth, with responsibility for its pharmaceutical and medical products business. He was elected to Wyeth's Board of Directors in 1995. Earlier in his career, Hassan spent 17 years with Sandoz Pharmaceuticals (now Novartis) and headed its U.S. pharmaceuticals business. Hassan received a B.S. degree in chemical engineering from the Imperial College of Science and Technology at the University of London and an M.B.A. from Harvard Business School. Hassan has chaired significant pharmaceutical industry organizations including The Pharmaceutical Research and Manufacturers of America (PhRMA) and The International Federation of Pharmaceutical Manufacturers Associations (IFPMA). Hassan also served on the board of the Proprietary Association, which is a forerunner of CHPA, the consumer healthcare trade group. In 2014, a CNBC panel named Hassan to a list of those who have had the most profound impact on the world of business in the previous quarter century.

Kristin Hornberger has a Healthcare Leadership role at IRI with many Consumer Healthcare clients, providing counsel in all facets of market research, marketing, and sales. Leveraging 20+ years of experience in working with a wide variety of healthcare companies, she has a proven track record of delivering innovative “Growth Delivered” insights and solutions, and behavioral and attitudinal insights via consumer and shopper technology platforms at IRI.

He is widely sought as an industry thought leader about healthcare industry trends, regulatory policy and emergent growth opportunities. In 2010, he facilitated negotiations between the White House and leading healthcare trade organizations pursuant to the passage of the Affordable Care Act and is considered on U.S. health reform.

He writes the Keckley Report, a weekly analysis of key industry trends and regular columns for Healthcare Financial News and Healthcare Executive. He is also frequent speaker for industry events and board meetings and contributor to CNN, Modern Healthcare, Politico, New York Times and Wall Street Journal media coverage about industry issues.

He holds a B.S. from Lipscomb University, Nashville TN, an M.A. and Ph.D. from The Ohio State University, Columbus OH and completed a graduate fellowship at Oxford University, UK.

Murray S. Kessler was appointed President, Chief Executive Officer and Board Member of Perrigo Company plc, effective October 8, 2018. Before joining Perrigo, Mr. Kessler served as the Chairman of the Board of Directors, President and CEO of Lorillard, Inc. (2010-2015). He served as Vice Chair of Altria, Inc. (2009) and President and CEO of UST, Inc. (2000-2009), a wholly owned subsidiary. Previous to his time at UST, Mr. Kessler had over 18 years of consumer-packaged goods experience with companies including Vlasic Foods International, Campbell Soup and The Clorox Company. Mr. Kessler served as voluntary President of the United States Equestrian Federation (2015-2020).

Slava is co-head of U.S. Consumer Investment Banking at CG Sawaya Partners.  Slava’s career has been dedicated to the industry and he is actively involved in advising public companies, private companies and financial sponsors on a variety of sell-side, buy-side and corporate divestiture transactions across the consumer health space.

Singer-songwriter John Ondrasik has spent the past decade writing deeply personal songs that include social messages, invoke the human spirit and make an emotional connection. With the past six albums by Five For Fighting, the hockey moniker stage name under which he performs, Ondrasik has seen multitudes of successes. Five For Fighting's breakthrough came in 2001 with the Grammy-nominated song “Superman,” and John’s performance at The Concert For New York.

Ondrasik proceeded to become part of the American songbook with the iconic hit “100 Years,” "World," "The Riddle,” “Chances,” and “What If.” John’s music has been featured in over 350 films, TV shows, and advertisements ranging from The Blind Side to The Sopranos. In 2018 John was the musical voice for the CBS hit show Code Black.

John has also been deeply involved in supporting our troops. From USO tours, supporting several Veteran oriented charities, and distributing over a million “CD for the Troops” to servicemen and their families around the world. “At the end of the day, it really is about doing your part, each one of us. In whatever area we can. What kind of world do you want?”

Ondrasik is currently working on a Broadway musical, various television projects, and a new Five For Fighting album while giving keynotes across the country to corporations and various organizations.

Starting in 1994, he acquired his first professional experience at Heineken. He joined Nestlé as an international marketing trainee in 1996, developing his career in sales and marketing management roles in Bangladesh and Indonesia and at the company’s global headquarters in Switzerland. He then took up general management roles of increasing importance in the Philippines and, from 2007 to 2013, in Greater China. In 2013, Schipper moved back to Switzerland as CEO of Nestlé Nutrition. He was appointed to the Nestlé Group Executive Board in October 2014. Since October of 2020, he has also served as Chair of the Global Self-Care Federation, a collection of associations and manufacturers in the self-care industry.

Heiko Schipper is a Dutch national. He is married and has three children.

Despite having her right leg amputated at age five, Bonnie St. John became the first African-American ever to win medals in Winter Olympic competition, taking home a silver and two bronze medals in downhill events at the 1984 Paralympics in Innsbruck, Austria. In recognition of this historic achievement, St. John was quoted on millions of Starbucks coffee cups and was honored at the White House by President George W. Bush.

St. John has achieved the highest levels of success in a variety of endeavors throughout her life. In addition to her success as a Paralympic athlete, she is a best-selling author, a highly sought after keynote speaker, a television and radio personality, a business owner and a Fortune 500 leadership consultant.

Today, St. John travels the globe as a leadership consultant, keynote speaker and facilitator for international summit conferences for senior-level executives. She frequently donates personal appearances to schools, homeless shelters, community groups and other organizations in hundreds of locations while traveling for corporate clients. In 2010, St. John once again represented the United States as a member of President Obama’s official delegation to the Paralympic Winter Games in Vancouver.

The celebrated author of seven books, St. John's most recent book, Micro-Resilience: Minor Shifts for Major Boosts in Focus, Drive and Energy, outlines a quick, easy and immediately effective program of tools and techniques to give you a competitive edge in today's dynamic world of changes and challenges.

St. John has been featured extensively in both national and international media including: Today, CNN, CBS Morning News, NBC News, PBS, NPR and The New York Times, as well as People, 'O' and Essence magazines, to name just a few.

In 2015, St. John was inducted into the National Association of Women Business Owners (NAWBO) Hall of Fame.

We encourage you to register and make your reservations early!

Hotel Reservations can only be made after registering for the 2022 Self-Care Leadership Summit. You will receive hotel reservation instructions in your SLS registration confirmation.

Hotel cancellations must be received 24 hours prior to your arrival date to avoid a penalty of one night’s room and tax.

This hotel does not provide a shuttle service.

Thank You to Our Sponsors!